Recently accepted articles from the lab

Three new papers from the lab have been accepted during the last weeks. They will be published online early during the next weeks/months, but here go the abstracts:

Nitrogen (N) deposition has doubled the natural N inputs received by ecosystems through biological N-fixation and is currently a global problem that is affecting the Mediterranean regions. We evaluated the existing relationships between increased atmospheric N deposition and biogeochemical indicators related to soil chemical factors and cryptogam species across semiarid central, southern and eastern Spain. The cryptogam species studied were the biocrust-forming Pleurochaete squarrosa (moss) and Cladonia foliacea (lichen). Sampling sites were chosen in Quercus coccifera (kermes oak) shrublands and Pinus halepensis (Aleppo pine) forests to cover a range of inorganic N deposition representative of the levels found in the Iberian Peninsula (between 4.4 and 8.1 kg N ha-1 yr-1). We extended the ambient N deposition gradient by including experimental plots to which N had been added for three years at rates of 10, 20 and 50 kg N ha-1 yr-1. Overall, N deposition (extant plus simulated) increased soil inorganic N availability and caused soil acidification. Nitrogen deposition increased phosphomonoesterase (PME) enzyme activity and PME:nitrate reductase (NR) ratio in both species, whereas the NR activity was reduced only in the moss. Responses of PME and NR activities were attributed to an induced N to phosphorus imbalance and to N saturation, respectively. When only considering the ambient N deposition, soil organic C and N contents were positively related to N deposition, a response driven by pine forests. The PME:NR ratios of the moss were better predictors of N deposition rates than PME or NR activities alone in shrublands, whereas no correlation between N deposition and the lichen physiology was observed. We conclude that integrative physiological measurements, such as PME:NR ratios, measured on sensitive species such as P. squarrosa, can provide useful data for national-scale biomonitoring programs, whereas soil acidification and soil C and N storage could be useful as additional corroborating ecosystem indicators of chronic N pollution.

View of Cladonia foliacea, one of the species used in this study. Photograph by Jordi Badia.

1. Drylands cover about 41% of Earth’s land surface, and 65% of their area supports domestic livestock that depends on the aboveground net primary productivity (ANPP) of natural vegetation. Thus, understanding how biotic and abiotic factors control ANPP and related ecosystem functions can largely help to create more sustainable land use practices in rangelands, particularly in the context of ongoing global environmental change.
2. We used 311 sites across a broad natural gradient in Patagonian rangelands to evaluate the relative importance of climate (temperature and precipitation) and vegetation structure (grass/shrub cover and species richness) as drivers of ANPP, precipitation-use efficiency (PUE) and precipitation marginal response (PMR).
3. Climatic variables explained 60%, 52% and 12% of the variation found in grass cover, shrub cover and species richness, respectively. Shrub cover increased in areas with warmer, drier, and winter rainfall climates while the response observed for both grass cover and species richness was the opposite. Climate and vegetation structure explained 70%, 60% and 29% of the variation found in ANPP, PUE and PMR, respectively. These three variables increased with increases in vegetation cover, particularly grass cover. Species richness also had a positive effect on ANPP, PUE and PMR. ANPP increased, and PUE decreased with increasing mean annual precipitation, whereas PMR increased with increases in the proportion of precipitation falling in spring-summer. Temperature had a strong negative effect on ANPP and PUE, and a positive direct effect on PMR. Standardized total effects from structural equation modelling showed that vegetation structure and climate had similar strengths as drivers of ecosystem functioning. Grass cover had the highest total effect on ANPP (0.58), PUE (0.55) and PMR (0.41). Among the climatic variables, mean annual precipitation had the strongest total effect on ANPP (0.51) and PUE (-0.41), and the proportion of the precipitation falling in spring-summer was the most influential on PMR (0.36).
4. Synthesis. Results show that vegetation structure is as important as climate in shaping ecosystem functioning Patagonian rangelands. Maintaining and enhancing vegetation cover and species richness, particularly of grasses could reduce the adverse effects of climate change on ecosystem functioning in these ecosystems. 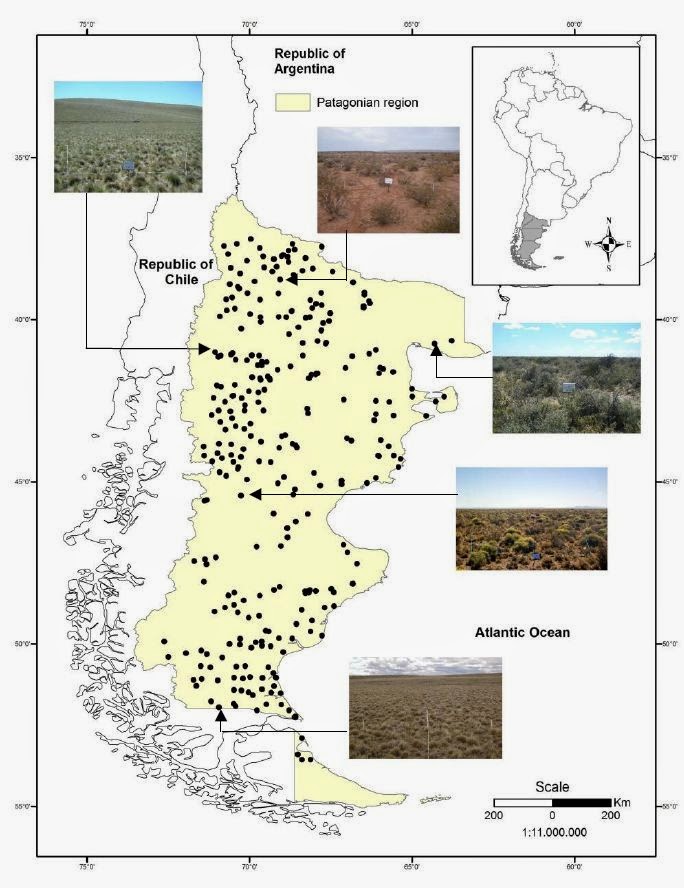 Location of sampling sites in Patagonia (black dots), with some examples of the vegetation types studied.

Understanding how organisms control soil water dynamics is a major research goal in dryland ecology. While previous studies have mostly focused on the role of vascular plants on the hydrological cycle of drylands, recent studies highlighted the importance of biological soil crusts formed by lichens, mosses and cyanobacteria (biocrusts) as a major player in this cycle. We used data from a 6.5-year study to evaluate how multiple abiotic (rainfall characteristics, temperature, and initial soil moisture) and biotic (vascular plants and biocrusts) factors interact to determine wetting and drying processes in a semi-arid grassland from Central Spain. We found that the shrub Retama sphaerocarpa and biocrusts with medium cover (25-75%) enhanced water gain and slowed down drying compared with bare ground areas (BSCl). Well-developed biocrusts (> 75% cover) gained more water, but lost it faster than BSCl microsites. The grass Stipa tenacissima reduced infiltration, but increased soil moisture retention compared to BSCl microsites. Biotic modulation of water dynamics was the result of different mechanisms acting in tandem and often in opposite directions. For instance, biocrusts promoted an exponential behaviour during the first stage of the drying curve, but reduced the importance of soil characteristics that accentuate drying rates. Biocrust-dominated microsites gained a similar amount of water than vascular plants, albeit they showed faster water losses than vascular plants during dry periods. Our results emphasize the importance of biocrusts for water dynamics in drylands, and illustrate the potential mechanisms behind their effects. They will help to further advance theoretical and modelling efforts on the hydrology of drylands and their response to ongoing climate change. 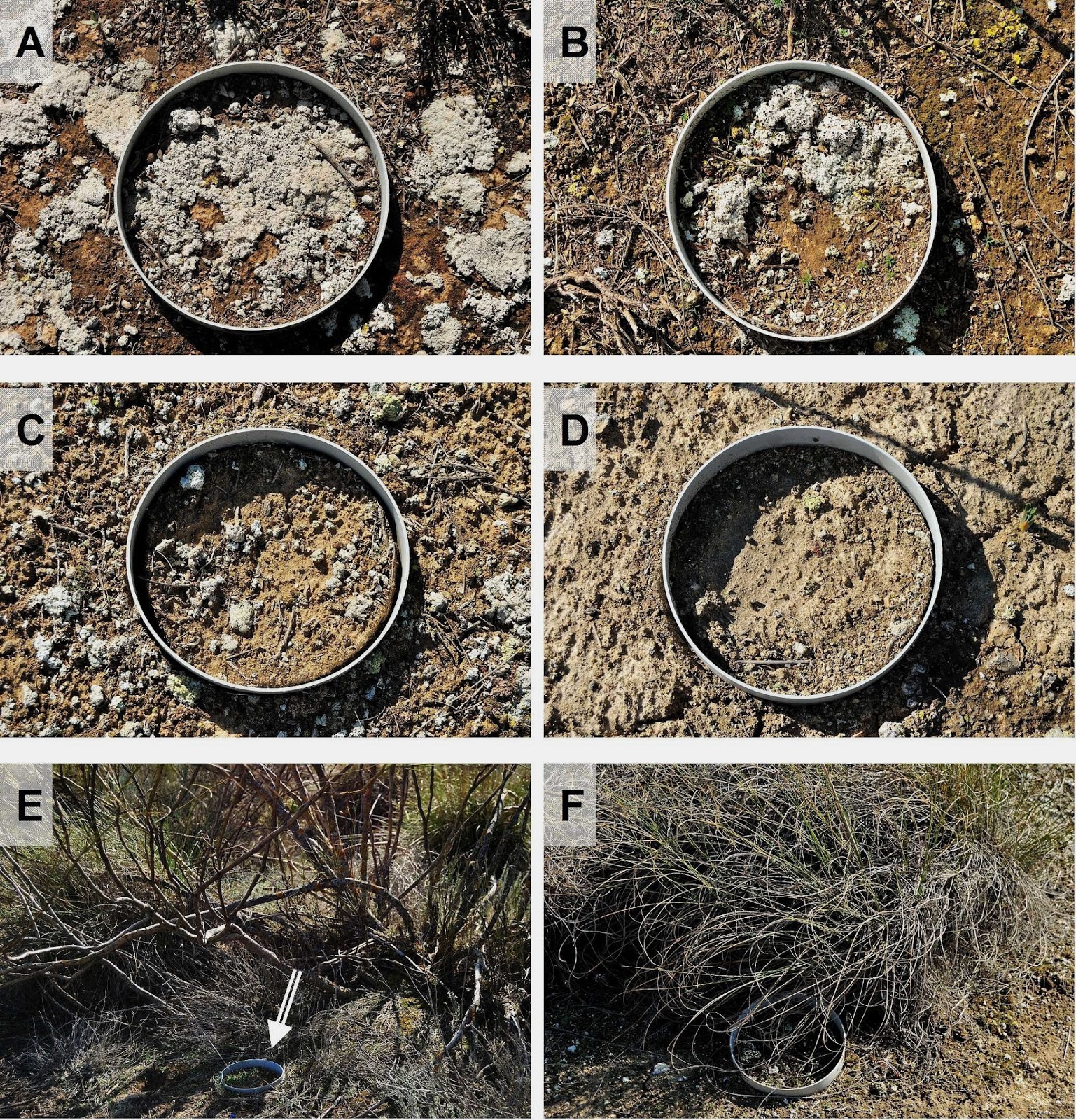