Behind the scenes of the Maestre lab (II)

We continue with the series of posts describing the “behind the scenes” of the research presented in the articles we publish (you can find the first post of this series here). In this case we will talk about a paper just published in the November issue of Ecosystems entitled “On the importance of shrub encroachment by sprouters, climate, species richness and anthropic factors for ecosystem multifunctionality in semi-arid Mediterranean ecosystems”, led by our former post-doctoral research associate José Luis Quero (now an Assistant Professor at the University of Córdoba, in Córdoba, Spain). 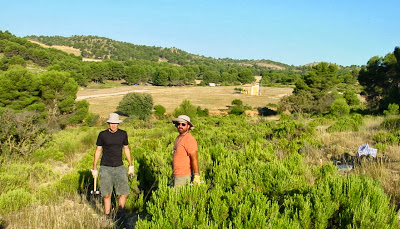 These are the Q & A for José Luis:


What is this article about?


This article shows how the effects of multiple factors, including sprouting shrubs, species richness, climate, and anthropic factors influence ecosystem multifunctionality in semi-arid Mediterranean grassland and shrublands. The strength of this study is that it is the first assessing the joint effects of encroachment and other factors on ecosystem multifunctionality, evaluated using multiple soil variables related to the cycling of nitrogen, carbon and phosphorus.


What are the main key messages of this article?


What have you enjoyed the most during the “life cycle” of this article (from its conception to its publication)?


From an intellectual point of view, I still clearly remember when I came up with the idea of doing a comparison between Stipa tenacissima grasslands and shrublands dominated by non-sprouting shrubs, thanks to several talks with Fernando Maestre. Initially, I was determined on doing a study focused only on shrublands, but Fernando opened my mind for trying a more ambitious design by including Stipa grasslands. Once we decided to move in this direction I could see the light at the end of a large tunnel of fieldwork and data analyses, but getting this paper out has not been an easy task!


The fieldwork conducted for this study was unforgettable. I will never forget the crazy journey done with Miguel, Manu and Javi. We surveyed all the study sites (located along a gradient of ca. 350 km) driving a caravan for 15 days, and collecting hundreds of soil samples during the Spanish Summer, which is not precisely the best moment of the year for doing this! We lived adventures and misadventures, which are beyond the scope of this blog, although we did not stop laughing at any moment.


What have been the major difficulties you have encountered when conducting the research reflected in this article?


Ecophysiology and Population Ecology were the main topics of my previous research. With this and other papers, I started to work on Community and Soil Ecology, and this was really hard. I had to get myself updated on literature and methodologies unknown to me. On the other hand, writting a concise and clear paper when dealing with so many variables was also challenging. Indeed, the paper has an interesting supplementary material that I strongly recommend to all the readers of our article to check.


Publishing today is really hard, particularly in top journals like Ecosystems. How has been your experience with this publication?


When I sent the paper to Ecosystems I did not initially expect to get the thorough set of comments received. Both reviewers were very constructive, and had some open qualms, which led the Handling Editor (Ann Kinzig) to reject the paper. However, she did a really nice work by highlighting the most important points of the manuscript we had to improve, and gave us the possibility of resubmit the paper. This encouraged us to write a new version of the manuscript and an extensive response letter. This stage of the paper was short on time but intense, since I revised the article during Christmas’s holidays because during my working time I was really busy preparing the teaching materials for my new job as assistant professor. Finally, all this effort paid off, and the revised version was accepted after some minor changes. From this experience, I learned that nowadays a rejection with possibility of resubmission must be grasped as a “major revision” more than a rejection itself.


Are there any additional remarks/comments you would like to make about this article?


This article, and many others from the Maestre Lab, tells us that the people working there are doing good science! However, not everybody knows that they are also wonderful people: Bea, Vicky, Dolo, Enrique, Miguel… Although we are keeping our collaboration on the distance, and more joint papers will (hopefully) be submitted soon, I am truly grateful for the very good time I spent at the Maestre Lab.